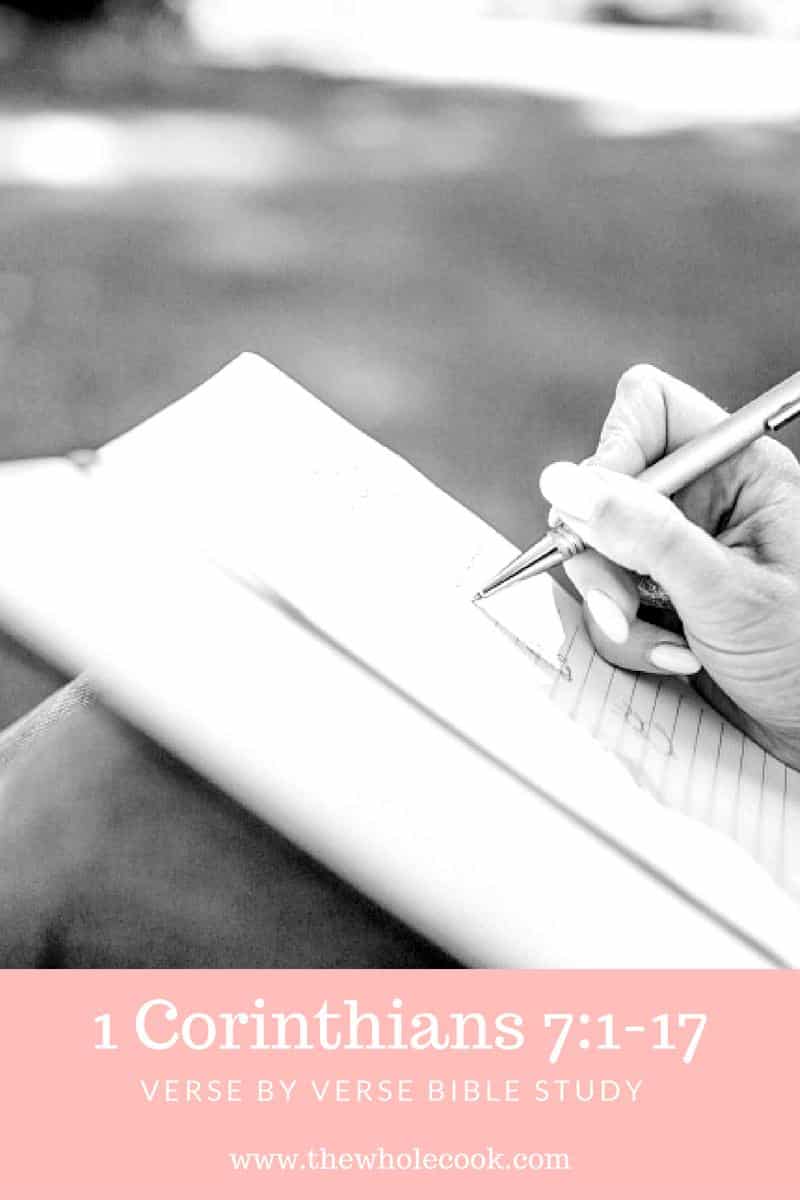 This is a continuation of Paul’s letter to the Christians in Corinth. In the previous chapters he wrote regarding reports he’d received of division among them and their condoning of an incestuous relationship. In chapter 6 he gave them instructions on how to best handle disputes between believers. He also wrote about how we shouldn’t allow our flesh body to rule over spiritual body.

In this chapter Paul is giving more advice, some is his own opinion (which he spells out) and some are God’s commandments. He is responding to a letter they sent. While we don’t know the exact content of that letter we have a good idea based on his reply. In verses 1 – 17 he instructs them on marriage between two believers and marriage between a nonbeliever and believer. I hope you’ll pull out your Bible and join me in a verse by verse study.

1 Now concerning the things whereof ye wrote unto me: It is good for a man not to touch a woman.

We can tell that Paul is responding here to a letter he received from the Corinthians. While we do not know the exact content of that letter we can get an idea of what it must have contained based on his answers.

If you’ll recall, the previous chapters were Paul addressing the Corinthians regarding other reports entirely (chapter 1 tells us someone in the Church of Chloe sent a report and chapter 16 will tell us that Stephanas, Fortunatus, and Achaicus sent other reports). It’s likely that the letter he is now addressing (from the Corinthians) contained no mention of the other items (the giving of glory to teachers rather than God and the condoning of an incestuous relationship) he’s already covered.

2 Nevertheless, to avoid fornication, let every man have his own wife, and let every woman have her own husband.

Now we’re starting to get an idea of what the Corinthians wrote to Paul about.

Using The Companion Bible and The New Strong’s Exhaustive Concordance of the Bible we can see that the word benevolence here is 2133 eunoia in the original Greek. It’s defined us kindness; euphem. conjugal duty – benevolence, good will. So Paul is saying that both the husband and wife should be kind to one another. In marriage we want to do what’s right and fair for our spouse.

If we’re treating one another with equal kindness then we are mindful of the needs of our partner. This includes physical needs.

5 Defraud ye not one the other, except it be with consent for a time, that ye may give yourselves to fasting and prayer; and come together again, that Satan tempt you not for your incontinency.

Let’s look at the word defraud in the Greek. It is 650 apostereo in The New Strong’s Exhaustive Concordance of the Bible, meaning to deprive. If you must be apart from your spouse make sure it’s by mutual agreement. It’s important that both are able to withstand that time apart and resist any temptation. Spend that time in prayer.

6 But I speak this by permission, and not of commandment.

Paul is letting us know that what he’s about to say isn’t a commandment from God. Rather it is his own opinion.

7 For I would that all men were even as I myself. But every man hath his proper gift of God, one after this manner, and another after that.

8 I say therefore to the unmarried and widows, It is good for them if they abide even as I.

This is Paul’s recommendation based on his own experience. It’s not God’s commandment. Paul did not marry and he is saying that’s a good thing. Imagine how difficult it would have been to do his travel and teaching with a family at home? Technology didn’t exist as it does today. He wouldn’t have had regular communication with his wife and children. How often would he have been able to see them? He is saying that if someone was going to do the work of God and bring God’s message to the nations (as Paul was called by Jesus to do in Acts 9:15-16) it would be far easier to do it without being married.

He also recognizes that each person will receive a different gift from God. Your calling may not look quite like his did. You may find that much of your seed planting actually occurs within a marriage. We’ll discuss this shortly.

9 But if they cannot contain, let them marry: for it is better to marry than to burn.

10 And unto the married I command, yet not I, but the Lord, Let not the wife depart from her husband:

Now we’re back to a commandment from God. Keep in mind that Paul is still talking to the church of Corinth here so the husband and wife would both be believers. We’ll find further evidence that this is what he’s referring to a bit ahead. The verse is stipulating that the believing wife should not leave her believing husband.

11 But and if she depart, let her remain unmarried, or be reconciled to her husband: and let not the husband put away his wife.

12 But to the rest speak I, not the Lord: If any brother hath a wife that believeth not, and she be pleased to dwell with him, let him not put her away.

Paul lets us know this part is his own advice and not a commandment. He says that if a brother (so this would be a believing husband) has an unbelieving wife he should not send her away if she wants to be with him. Paul wants us to understand that this marriage is okay even though one is a nonbeliever. Of course the nonbeliever shouldn’t prevent the believer from serving the Lord.

You’ll see here and throughout this chapter that the husband and wife have equal rights. God is fair in this and all things.

13 And the woman which hath an husband that believeth not, and if he be pleased to dwell with her, let her not leave him.

The word sanctified here is 37 haviazo in the Greek. It means to make holy, i.e. (cer.) purify or consecrate; (mentally) to venerate:- hallow, be holy, sanctify. Does the unbeliever automatically become a believer through association? Are they then saved without actually accepting Jesus Christ as their Lord and Savior? No, of course not. There is much documentation in scripture that salvation only comes through Him. However, the unbelieving spouse will see and may be influenced by the believing spouse. The believing spouse is planting seeds within that unbelieving spouse in how he/she lives his/her life. We sow the seeds but only God can give the increase (1 Corinthians 3:6-7). We cannot make anyone a believer.

The children of a marriage between a nonbeliever and believer also benefit from that union remaining in tact (assuming the nonbeliever wants to remain). The children are being taught the Word. They too can witness the actions and faith of the believer.

1 Peter 3:1 Likewise, ye wives, be in subjection to your own husbands; that, if any obey not the word, they also may without the word be won by the conversation of the wives;

1 Peter 3:2 While they behold your chaste conversation coupled with fear.

We’re going to take quite a bit of these verses back to the original Greek to ensure we’re getting an accurate translation.

Verse 2 looks different too when you actually use the Greek. Chaste is 53 hagnos in the Greek. It means clean, i.e. (fig.) innocent, modest, perfect:- chaste, clean, pure. Conversation (also in verse 1) is 391 anastrophe which means behavior. Coupled with is better translated to in. Fear is used here in the sense of reverence. This verse should look more like this: While they behold your clean/good/pure behavior in fear (reverence).

Now we can see that Peter is saying that an unbelieving husband (or one is who living counter the Word) may witness the loving behavior of the wife and may come to know the Lord through it. The wife is planting seeds of Truth in how she lives and the unbeliever benefits from that.

15 But if the unbelieving depart, let him depart. A brother or a sister is not under bondage in such cases: but God hath called us to peace.

If the unbelieving spouse leaves let them go. The believing spouse is not under bondage (has not been enslaved) in such cases. The believer should have peace of mind because they are in Christ Jesus. It’s going to be okay. They are living in the Word and God will be with them.

17 But as God hath distributed to every man, as the Lord hath called every one, so let him walk. And so ordain I in all churches.

Paul is saying the same is true in churches. If an unbeliever wants to go let that person go. We all have free will. We do not know if we can save that person and it can’t be done if that person isn’t willing (and if God doesn’t cause the seed you’ve planted to take root and flourish). As believers we should remain in the peace of mind that God provides if an unbeliever leaves the church or the family. We do our part. We plant. We pray. We live our lives in the Word. There is peace in that.

published on January 6, 2017 by Christina

« Previous PostTo Know His Word: How I Truly Became a Christian
Next Post » 1 Corinthians 7:18-40

Hello! I'm Christina. I'm the food blogger behind The Whole Cook. I create recipes the whole family will love using real (and really tasty) foods. Join me for yummy eating that won't compromise your healthy lifestyle! 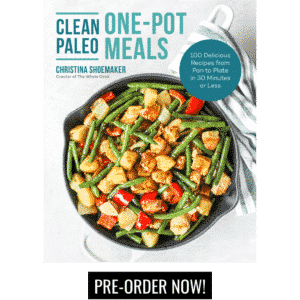