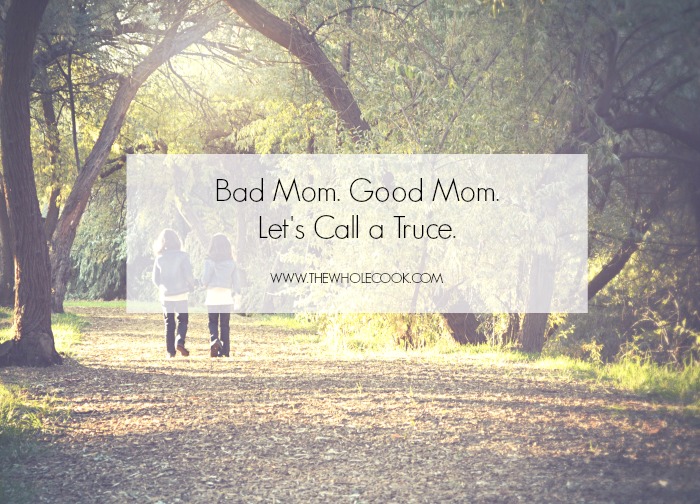 Recently I read an article about how the “bad mom” is the new trend. The gist (although its definitely worth reading on your own) is that the it thing is to label yourself the anti-baking, anti-costume making, anti-puzzle building mom. It’s cool to be the slacker mom. Suddenly the slacker mom is as intimidating as the mom who crafts and plays with her kids all day who is often perceived to be.

Just google mom bloggers and you’ll be amazed by how many solely generate content devoted to what bad parents they are. Are they really bad parents? Probably not. But their every post is about their missteps as parents. What about what they’re doing right? Well that’s not as funny.

The alternative is often the mothers who ONLY showcase their successes. Are they really perfect parents? Doubtful. They’re not painting the whole picture either.

So why are we one or the other duking it out for supremacy?

Aren’t we really a bit of both? Sometimes successful and sometimes missing the mark? Isn’t that normal? 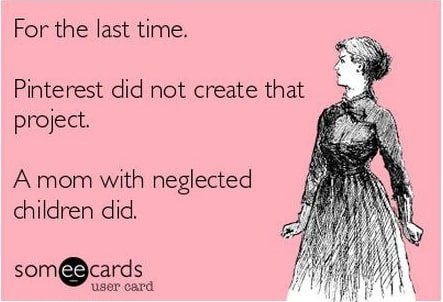 I couldn’t stop thinking about it. Not because I spend a lot of time on Pinterest. I don’t. But that’s not the point. The point is that some mom who prides herself on not being crafty decided to put mothers who are on blast. It’s ridiculous.

You could say that ANYONE who does ANYTHING (certainly not just Pinterest) TO EXCESS is likely neglecting their family. Watching television, playing on your phone, working, becoming a yo-yo contest competitor, etc… the list goes on and on. Yet those activities in and of themselves DON’T make you a bad parent. It’s a matter of how much time you dedicate to those tasks. If they take you away from your kids to the point that you’re not spending any quality time together then of course it’s a problem.

This e-card struck me as just another infuriating example of women hating on other women instead of supporting each other. We can do better than that, ladies.

In October I wrote about how motherhood is the ultimate competitive sport. In the post I talk about how some of the competition we experience is completely in our own heads. It’s amazing how women can spin what one person does as a parent into a commentary on what they’re doing. In reality, one doesn’t necessarily have anything to do with the other. I believe we’re all likely guilty of it to varying degrees.

So to recap… The mom who likes to parade her failings mocks the mom who doesn’t. The mom who doesn’t advertise her mistakes (but naturally makes her own too) judges the woman who does. And to make it even more complicated, some of it is just in our imagination. Sometimes we aren’t being judged at all but we judge ourselves based on what someone else does and blame them for it.

The truth is we’re probably all just doing our best to raise good kids. Some days we feel great about our ability to parent. Other days we’re certain child services will be knocking on our door shortly.

The guilt is constant. I’m guessing that’s just a mom thing along with lack of sleep and finding endless crushed up cheerios in the car.

A good read is here from Proverbs 31 Ministries. The title really says it all. Bad moments don’t make bad moms.

Let’s surround ourselves with people who encourage us and let’s encourage everyone else in the trenches of motherhood too. We can all use all the help we can get.

Hello! I'm Christina. I'm the food blogger behind The Whole Cook. I create recipes the whole family will love using real (and really tasty) foods. Join me for yummy eating that won't compromise your healthy lifestyle! 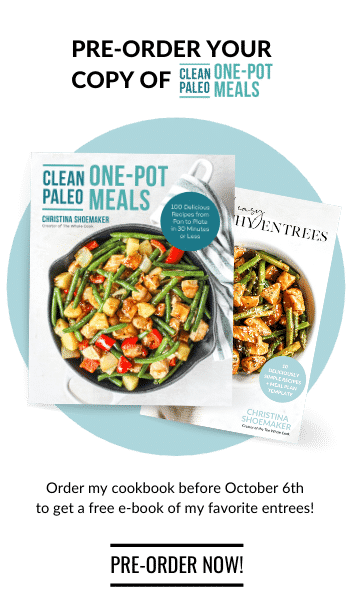