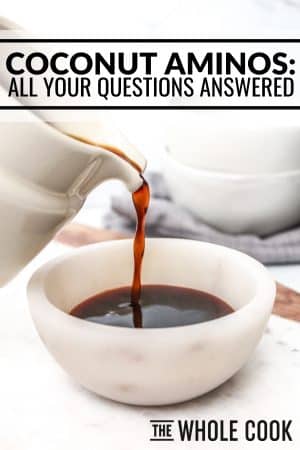 If you’re new to a healthy Paleo-inspired or real foods focused way of eating, you may be perusing recipes and see one ingredient time and time again that has you confused. Coconut Aminos. What the heck is that? Let me explain.

Coconut aminos is a soy sauce alternative. It’s used often in Paleo cooking but you definitely do not have to be on a Paleo diet to appreciate it.

What is coconut aminos made from?

Typically the ingredients are simply coconut tree sap and salt. That’s it! (Check your label to confirm just in case the brand you’ve selected is different.)

It’s gluten-free, vegan, Paleo, Whole30, and low-glycemic. It contains a wide range of minerals including vitamin C and 17 amino acids. It also has as much as 65% to 75% less sodium than soy sauce. (Exactly how much depends on the brand you purchase.)

It tastes a lot like soy sauce! The similarity is pretty remarkable actually. It has a bit more sweetness, less saltiness, and a slightly milder flavor than soy sauce. Really it’s very comparable.

And the big answer to the question I get the most often — it does not taste like coconut. At all.

Why use coconut aminos instead of soy sauce?

Coconut aminos is also free of soy, which some people like to limit in their diet.

How do you use coconut aminos?

The obvious place to use coconut aminos is anywhere you would typically use soy sauce. Add it to rice, use it in stir-fries, drizzle it over steamed veggies, and dip your sushi in it. You’ll find coconut aminos used in many recipes here in marinades, sauces, and even some soups! It adds a richness of flavor and a hint of sweetness that I love!

I substitute coconut aminos for soy sauce in a 1:1 ratio. While soy sauce may have a bit of stronger flavor, it’s not enough of a difference to warrant using more or less of one or the other.

Here are a few recipes you may want to try:

What’s the difference between coconut aminos and liquid aminos?

Where can you find coconut aminos?

You can find coconut aminos in your local healthy food store (I get mine at Whole Foods), higher end grocery stores (my sister can find it at Publix), and online.

How do you store coconut aminos?

Coconut aminos can be stored in a pantry or cabinet at room temperature if unopened. Once opened, coconut aminos should be refrigerated.